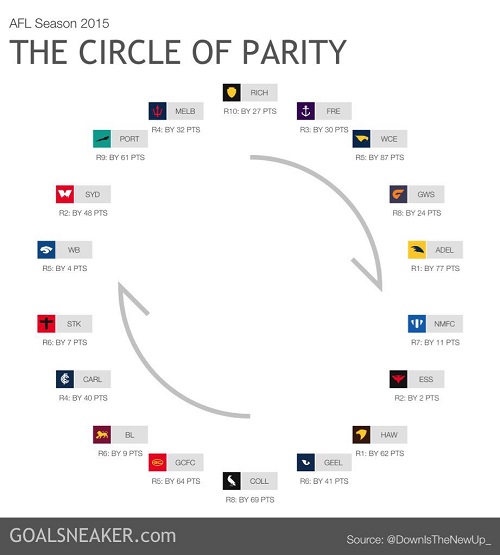 1. #Thank5 – In a perfect world, champions reach 300 games and leave the field chaired off by their team mates after a grand final win. Of course that rarely happens though if it’s anyone who deserved otherwise it’s Chris Judd. The Carlton and West Coast great ruptured his ACL against Adelaide and has subsequently retired from football. He’s a man who said pretty high standards not only on the field, but in his behaviour and professionalism off it. Enjoy retirement, Juddy – you will be missed.

2. Ryan Crowley – Probably one of the game’s most disliked players, the little shit from Freo has copped a year’s ban for taking methadone. It’s also been back dated to last September because yeah, we get so much consistency in decision making. They should have given him two.

3. Sam’s backside – The Freeze MND fundraiser at the G on Monday was sensational except for one thing: when I saw Sam Newman go down the slide in a mankini I had to call the police to report that I’d been eye raped.

4. The circle of parity – Love the graphic above, demonstrates just how close the 2015 season has been.

5. Ooh snap! – Ben Ross and Wendell Sailor arm wrestle on the NRL Footy Show. Once you hear it, you can’t unhear it. You’ve been warned. Have a watch here.