1. Bye, bye, bye – Why is the bye spread over three rounds this year? Why are they playing a Thursday night game this week? So many unanswered questions.

2. Power Rangers are go – Yep, we’ve all seen the comparison shot with Hawthorn’s shiny shiny away jumper displayed next to the white and gold Power Ranger. Even Titus has had a crack at it. I cannot believe that was the end result and everyone in charge went, “Yep, we’re happy with that one.”

3. 41 seconds – The poor Dees can’t take a trick at the moment, going down to the Saints right at the very end. Alan Richardson’s reaction in the coaches’ box was a ripper though – skip to the last 30 seconds of this video to see what I mean.

4. President’s Round Table – I finally got around to watching the President’s Round table on Fox Footy with David Koch, Eddie McGuire, Andrew Pridham and Peter Gordon and it was one of the most interesting football segments I’ve seen in a long time. Honestly, I was riveted. Nice to hear from these guys for a change and I thought the questions were really well moderated. I can’t find a link online but the synopsis is here.

5. Origin record – 91,513 at the MCG to watch NSW beat Queensland in game two of the rugby league State of Origin. Cracking night and pretty happy to have seen the mighty Blues get up. The yelling out during the one minute’s silence for Ron Clarke probably wasn’t the highlight (or necessary) though. 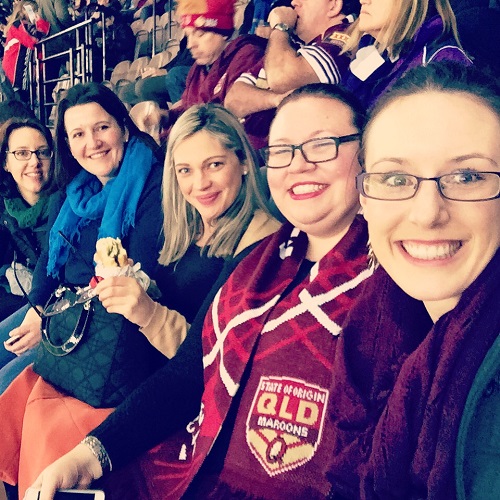 That moment when you sit with the good mates you’ve made since moving interstate 10 years ago and you’re watching your home team play the game you grew up with and they defeat the old enemy in front of a record crowd at one of the best sporting grounds in the world and some bloke you don’t even know sitting in front of you turns around and high fives you and life is just great.

1. Indigenous Round – What is it about themed rounds that brings out all the flogs? Every year, whether it’s Indigenous round, women’s round, the anti-homophobia games, social media gets clogged up with tossers who demand to know when it’s white straight male round. Some of the comments want to make me cry when I realise how much ignorance still exists in the community.

2. Mick’s gone – So, anyone surprised that Malthouse didn’t see out the season at the Blues? Nah, didn’t think so. I think it’s pretty tough to blame just one man for the mediocrity of 50 and there’s no doubt that at the end the club didn’t pay him the respect he richly deserved. Enjoy retirement Mick.

3. The great jumper swap – When Geelong’s Cam Guthrie played against his childhood hero Chris Judd last Friday night, he made good on a promise to himself that he’d one day ask for the Carlton great’s jumper. I think it was a very sweet moment and shows that doesn’t matter if you’re playing at the highest level, you still have heroes to look up to.

4. Boooooo – So why do they boo Goodesy? That seems to be the biggest question of the week. Hawks fans have come into question (though they are certainly not the only ones who do it) and claim it’s not motivated by race. Colour me sceptical. This is still one of the best pieces I’ve read on the subject.

5. One point – To divert from AFL for just a second because it’s Origin time aka most important time of the year for a New South Welshperson: one fucking point. You’re killing me NSW. You better bring it in game two, that’s all I’m saying.